A new banner for Islington TUC 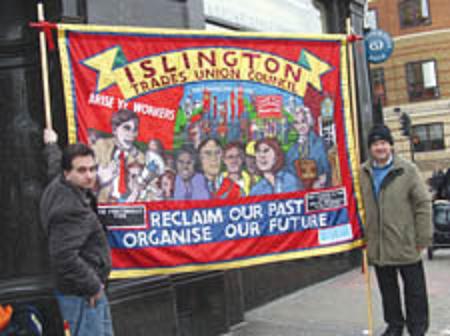 From Paine to the Tolpuddle Martyrs and onwards, a celebration of workers' struggles

Mick Gilgunn, left, and Gary Heather show off the new banner symbolising a new campaign for workers' rights in Islington

A spectacular new banner measuring eight feet by six and depicting Islington's radical history from the time of Tom Paine. The colourful banner, which cost £650, celebrates the first year of Islington's relaunched Trades Union Council. TUC officials and Labour members were at Islington Town Hall last night (Thursday) for the launch of the new banner. The event was organised by Trades Union Council president Gary Heather and secretary Mick Gilgunn.

The design of the banner includes the Angel Inn, where Tom Paine is said to have written the Rights of Man in 1792. It depicts Copenhagen House, scene in 1834 of a demonstration of 100,000 people campaigning for the Tolpuddle Martyrs to be returned to Britain from Australia, where they had been forcibly transported for setting up an early trade union.The banner shows Islington Town Hall, with the red flag flying, and Vic Turner (wearing a red tie), one of the Pentonville Five imprisoned in 1972 for defying an anti-trade union law. In the foreground are contemporary workers, including a nurse. The banner was sponsored by solicitors Edwards Duthie and handcrafted by Ed Hall.

Mr Heather, a full-time executive member of the Communication Workers Union, said the original Trades Council had stopped functioning for about a year. "We resurrected it about 18 months ago", he added. It now has 5,500 members and meets at Islington Town Hall on the first Thursday of the month. He said: "This banner symbolises a new campaign for workers rights in Islington". Mr Gilgunn, a member of the Union of Construction and Allied Technicians, was delighted by designer Ed Hall's intricate work. "It encapsulates the whole radical story of Islington", he said.

This article was originally published by the Islington Tribune.

Reason for quoting: the South London Voluntary Sector branch that's involved in employers like Foundation66 claimed to have paid for a similar banner while strangely silent about the refusal of Edwards Duthie to provide any service on employment law. Unless you count the sort of service which is complained about by two members in succession, month after month, with agreement by one member of the branch committee who had tried to use them himself. So that's three. And the RMT sacked this solicitor too.